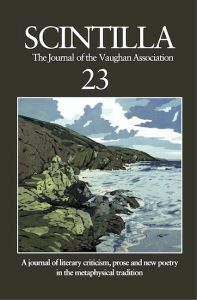 Scintilla 23 is now available on Amazon: UK and US. In this new edition Peter Pike explores the legacy left by Henry Vaughan’s attention to the ‘slightest things’ on the grace of subsequent writing in English, while Donald Dickson discusses the classical and contemporary sources that reveal the intellectual thinking of Henry Vaughan as a scholarly editor. Other fascinating articles include Tony Brown’s study of the creative relationship between R. S. Thomas and Elsi Eldridge, Holly Nelson’s examination of Vaughan as a transatlantic poet and the afterlife of the Silurist in 19th century North America, and many more.