In honour of the 400th anniversary of the birth of the Vaughan twins – Henry, the poet and physician, and Thomas, the priest and alchemical philosopher – the Vaughan Association held an online celebration on Sunday 25th April 2021, from 4-6pm BST (British Summer Time). The event included brief talks about the brothers, interviews with contemporary artists who have been inspired by them, and the launch of a new book about Henry Vaughan’s poetry. There were also readings of modern poems in the Vaughan tradition, musical interludes, and examples of the twins’ continuing influence in the Usk Valley area of South Wales. The occasion concluded with a short film of the annual wreath-laying ceremony at the grave of Henry Vaughan in the grounds of Llansantffraed church, near Brecon, where his brother Thomas ministered in the mid-seventeenth century. The wreath was laid by members of the local community, the Brecknock Society and Llansantffraed parish. 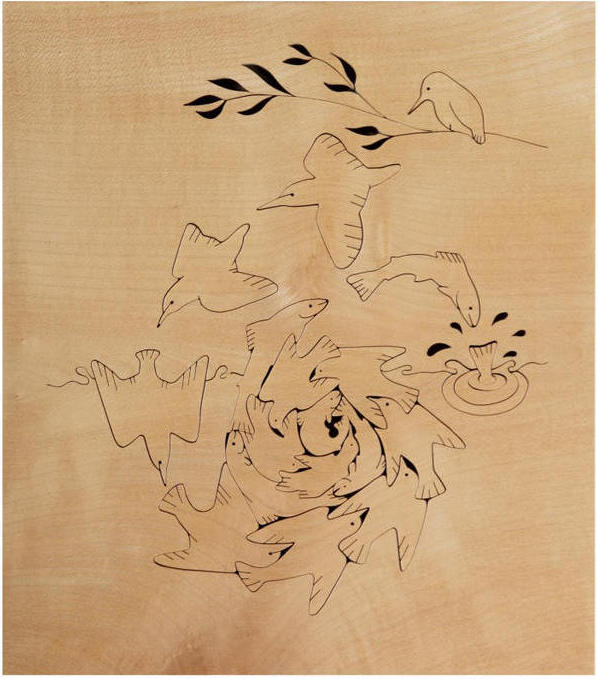 Unfortunately, we were unable to show the artwork of sculptor Philippine Sowerby during the event, due to technical issues.

If you would like to make a donation towards the work of the Vaughan Association and the publication of its annual journal of essays and poems in the metaphysical tradition, Scintilla. This can be done via our Paypal account:

or by cheque payable to:

Thank you for your support.

This conference is in honour of the 400th anniversary of the birth of the remarkable twin brothers Henry and Thomas Vaughan, and will be held in the cathedral town of Brecon in mid-Wales, close to the Usk Valley where the Vaughans were born and spent much of their lives. The purpose of the conference is to explore the inter-relation of language, faith and the creation, both in their work and in that of the most important literary influence on Henry Vaughan, his fellow Welsh poet George Herbert. Henry Vaughan and George Herbert are widely considered to be among the greatest devotional poets in the English language, while Thomas Vaughan made a significant contribution to early modern debates on philosophy, mysticism and natural science.

Plenary speakers at the conference will include Dr Rowan Williams, Prof Donald Dickson, Dr Holly Nelson and the Rev Canon Mark Oakley. The conference will also feature readings by modern poets writing in the tradition of Vaughan and Herbert, and several musical events. There will the opportunity to visit relevant local sites including the church at Llansantffraed (where Thomas was rector and Henry is buried), and a chance to follow the “Vaughan walk” through the beautiful landscape of the Usk Valley and the Brecon Beacons.

Shorter papers (20-30 minutes) are invited on any aspect of the conference theme, which may be addressed comparatively or in relation to any one of the three authors. Attention to their writing in its relevant contexts – literary, philosophical, religious, political, scientific, geographical, national – would be warmly welcomed. Possible topics through which to approach the writers’ work might include literary influences, such as Herbert on Henry Vaughan’s work, the Vaughan brothers on each other’s ideas and writings, or Henry Vaughan on later authors; devotional poems/prose and seventeenth-century politics; Henry Vaughan and friendship; devotional poetry and the other arts; metaphysical writing and the natural environment; poetic or philosophical responses to the Bible; poetry and medicine or natural science; Herbert and/or the Vaughans in their Welsh contexts; the language of alchemy; the poetics of retreat. Proposals of approximately 200-300 words should be sent to conference2021@vaughanassociation.org by 30th November 2020.

The conference will be hosted by the Vaughan Association, in partnership with the Brecknock Society and the George Herbert Society. The conference sessions will take place in a number of cultural and historic locations in and around Brecon, and accommodation will be available at The Castle of Brecon Hotel, as well as in local Bed & Breakfast establishments and holiday accommodation. Further information will be provided in due course on the website of the Vaughan Association, www.vaughanassociation.org.