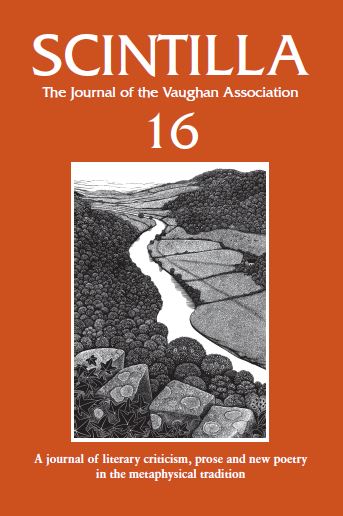 Scintilla 16 continues its tradition of crossing the critical-creative divide by bringing together literary scholarship, creative prose and new poetry (both long and short poems). Scintilla was first published in 1997 by The Usk Valley Vaughan Association (now The Vaughan Association) founded in 1995 by a group of poets and literary scholars to mark the tercentenary of Henry Vaughan’s death, 23 April 1695. Since that time the journal’s distinctive combination of poetry, criticism and prose has been committed to exploring the interests and themes of its tutelary spirits, Henry the Poet physician (1621-95) and his priest-alchemist brother Thomas (1621-66). Identical twins, they seem marked by their Breconshire birthplace amidst the hills and groves, creatures, herbs and stones, history and myths of their river valley – a magical landscape imprinted on their imagination.

All too soon Civil War, regicide and republican revolution cut down the institutions of Church and State. Both brothers fought in that war and the discontinuity and alienation that followed were traumatic. Defeated, the twins reinvented themselves, Henry as “Silurist” and Thomas as “Eugenius Philalethes”. Their writings reveal the connections between identity, adversity and the creative process, connections which remain central to Scintilla. This journal exists to explore such conjunctions, crossing boundaries between past and present, place and vision, the material world and our inner lives, between metaphysical experiences and language, between science, poetry and healing.

Scintilla 16 will be the first issue published in simultaneous paperback and Kindle e-book editions. Over the last several numbers the journal has expanded its focus to take a broader look at the metaphysical tradition, including articles on major figures (Shakespeare and George Herbert among them), and other metaphysicals and contemporaries such as Thomas Traherne, alongside later writers including Blake, Levertov and R. S. Thomas. The journal nonetheless remains rooted in the Vaughans, witness RobertWilcher’s opening piece on Thalia, the Greek pastoral muse invoked by Thomas Vaughan, as the embodiment of the vitalism that lay at the heart of both brothers’ vision of creation as “the divine Breath” that animates and inspirits all things. Colliding with “the mechanistic materialism of the European Enlightenment”, the Vaughans’ vitalism was much more than an acquired theorem: it was, rather, something rooted in their childhood fascination with the mysterious beauty, energy and complexity of nature.

Christopher Hodgkins explores a case history of another kind of encounter with God and the natural world in Hackluyt’s famous publication (a source for Shakespeare) of two sixteenth century English slavers’ narratives of their unsettling first-hand experiences of the New World of Mexico. We are confronted with polar opposites. Miles Phillips records an interior journey of personal transformation, enlarged human sympathy and a growing awareness of colonial oppression. Job Horton, as if traumatised, remains in denial and “immune to any soul-making possibilities”. Together these “colonialist ur-texts” demonstrate, on the one hand, human fallibility and incipient brutishness and, on the other, the capacity for life-enhancing wonder and the possibility of spiritual redemption and forgiveness – the very strands that Shakespeare weaves into The Tempest.

Forgiveness and redemption figure, too, in Joseph Sterrett’s examination of the imagery of Cain in George Herbert’s poetry, and its place in the theological debates triggered by English Arminianism. Cain, commonly understood as the quintessence of extreme wickedness to whom the fearful justice of eternal damnation is meted out, is for Herbert an embodiment of the pain and anguish common to all sinners, great and small, whose despair the coming of Christ dispels. Not even Cain, the first murderer and fratricide, is beyond redemption. That shift in Cain’s status, and the deeply-felt emphasis on redemption and forgiveness are central, too, to Henry Vaughan’s struggle to come to terms with the traumatic anguish and anger of his experience of Civil War bloodshed which he poignantly (and for his enemies, perhaps, pointedly) compares to the spilling of Abel’s life. Vaughan’s spiritual indebtedness to Herbert went deep. That crucial creative relationship features again in Erik Ankeberg’s exploration of holiness (and the ongoing, often contentious debate about its true nature in the period) in what he calls the “incarnational” poetry of George Herbert, designed, like prayer, to translate the Christian to Christ. For him and for Henry Vaughan the writing and reading of “true verse” was instrumental to the pursuit of that “practic piety” which they saw as the goal and hallmark of authentic holiness.
Jeremy Hooker is, of course, very much of our moment, a denizen and deep explorer of the borderlands we all, perforce, inhabit. He is not, in any formal sense, a writer of religious poetry embedded (like Herbert’s and Vaughan’s) in doctrine and scripture. But his long engagement with the natural world and sustained pondering the nature of lyric poetry and the limits of language is essentially a spiritual questing. For him, lyric verse is “a way of seeing that should reach beyond the eye and ‘I’”: it must venture beyond quotidian discourse and the language of reason “to a new way of knowing”. Something of what might be involved in such an evolution is broached in Fiona Owen and Meredith Andrea’s personal dialogue on the processes of poetic discovery they experienced through a collaborative writing exchange over a period of time and at a distance. Certainly they remind us that poetry may not spring simply from the observing eye or a fixed ego but takes shape and speaks from somewhere “in between”.
The poems in Scintilla 16 open with what was a dominant theme in this year’s submissions: the experience of death and loss (particularly of a father) that leaves the poet negotiating a borderline where the living and the dead, past and present, convergence and separation meet. So Alan Payne’s opening poem ‘Higger Tor’ sets for us the theme of “winter’s dislocations”, while in Greg Miller’s moving poem ‘King David’, though the father is “a king of a man . . . He could not shield us” from his own death. Several poets employ the technology of our own day to represent this world of feeling. “Every death is a world’s end”, asserts Christopher Meredith, “a synaptic powercut”. “Ildiaf! Gadawaf / i’r geiriau / fy nghornio”, cries Aled Jones Williams in Welsh, “Yield! Let / the words stetho- / scope me”. Language itself is the bringer of news. “You are the universal router” asserts Oliver Comins, “earthbound, / sky bound, a water-thralled presence awash / with minerals and slow liquids, living for news”. Ghosts and angels, the fragility of this creaturely world, birth and rebirth abide in these poems. “[T]hey are ever returning to us, the dead”, W. G. Sebald reminds us in ‘The Emigrants’. Location and dislocation, journeying, music, meditations on place and the “I” all contribute to the poems in this issue. Despite life’s toughness and transience, relationships and love are celebrated, with Victoria Field’s ‘Walking to Rosslyn Chapel’ providing a closing benediction.
Order from Amazon
Download the promotional pamphlet